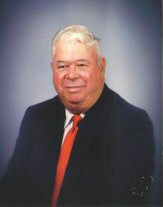 Born in Eureka, CA, he attended schools in Arcata, CA and joined the navy in 1947.

He worked a a realtor associate after retiring from the navy and lived in Chula Vista until moving to Turlock in 1980. He was a member of the Fleet Reserve, NRA,and volunteered as a hunter safety instructor. He was very active in the Presbyterian Church and helped feed the homeless with Daily Bread.

A graveside service was held at San Joaquin National Cemetery, Gustine, CA. followed by a memorial service at his church.