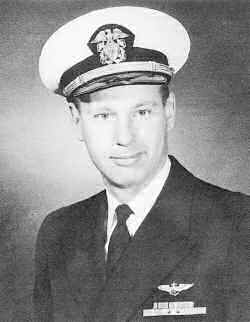 RAYMOND J. BORNTRAEGER CDR USNR retired. Ray passed away on January 31, 2012 in Lady Lake, Florida at the age of 85.

Ray was born on August 19, 1926 in Louisville, KY where he spend his youth. It wasn't until a Navy recruiter came to his high school seeking candidates for a new flight training program, that he left his hometown, eager to take up flying. He went to Emory & Henry to start college until the flight program began in July 1944. That not only began his Navy and college careers, but it was also the time he married Blanche Bell, also of Louisville, his wife of 61 years who passed away in 2008. Ray Blanche and their daughters lived in Pensacola, Florida where he received his flight training at the Pensacola Naval Air Station. he did not see combat in WW II and was released from active duty in November 1945. Ray was recalled to active duty in August 1948 and assigned to Corpus Christi, Texas for advanced flight training. After completing training he was assigned to VC-11 Detachment at NAAS Miramar near San Diego, California. In June 1952 the Detachment was transferred to NAS Barbers Point, Hawaii where on June 18, 1952 the Detachment was commissioned as Air Borne Early Warning Squadron One (VW-1). The Squadron flew PB-1W Aircraft which were B-17G's modified with advanced Radar, the predecessor of today's AWACS. Ray flew as a Radar Controller or Pilot during his tour with VW-1. In 1953 Ray was a Flight Crew member of "VW-1 Detachment Able" which was deployed to Japan with three aircraft for service in the Korean Conflict. The Detachment operated during the months of February and March 1953. Operating out of NAS Atsugi, Japan, one aircraft each day flew a 12-14 hour missions in the area of Wonsan, North Korea in support of Carrier Air Group Five (CAG-5). For its work in Korea the Detachment received the "Navy Unit Commendation". Ray was transferred in April 1953 to NAS Memphis, Tennessee. After Memphis he served at NAS Glenview, IL, NAF Trenton, NJ and finally duty in Washington, DC in the Navy Bureau of Personnel (BUPERS). Washington DC became his favorite duty station and he found ways to stay in DC as long as possible. He remained in Washington until retiring from the Navy in May 1967 with the rank of Commander.

While in the service, he received his undergraduate degree from Xavier University in Cincinnati, Ohio, his graduate degree in Management from George Washington University, and finished much of his work towards his PhD. After retiring from the Navy he joined the US Civil Service Commission, Bureau of Personnel Management, where he developed numerous training programs for use nationwide. After his retirement from Civil Service in May 1979, he worked for a few years in private industry.

Ray and Blanche moved from Washington to Cocoa Beach, Florida for a short time before returning to Louisville for 7 years to care for Ray's aging family members. Afterwards, they returned to Florida, living in St. Pete Beach. Seeing ads for "The Villages", they made a short visit, and 4 weeks later were residents of La Reynalda. Some of their happiest years were spent there. Ray was always involved in something. In high school he was a member of the Pep Club. He and Blanche were active in various Navy bridge clubs and the BUPERS Bowling Team. He was President of his children's PTA, and Treasurer of their local Community Club. One of his favorite clubs was the historic Old Dominion Boat club in Alexandria, VA, where he was Commodore for several terms. He was an officer of the American Legion in St. Pete Beach and then in The Villages. Ray held office or was active in many clubs, such as the Bonsai Club, the La Renalda Social Club and Retired Military Officer's Club, to name a few. Ray was also a man of many talents: home renovations, artistic painting, bonsai gardening, and playing the organ. Ray will be missed by his 4 Daughters, 6 Grandchildren and spouses, his Great-Granddaughter, his son-in-law, and countless other extended family members and friends in Florida, nationally and abroad. Commander Borntraeger will be buried with Military Honors in Arlington National Cemetery, Arlington, Virginia.